With winter approaching in Europe, Antifreeze and Coolants generally get some more -well deserved- attention than usual. In this article we highlight in short why it is important to pay attention to this fluid and what the main differences are between the fluids in the North Sea Lubricants portfolio.

Function of the cooling system
The ‘engine cooling system’ is a complex system; consisting of many different materials such as rubber hoses, aluminum or copper radiator and cast-iron or aluminum engine blocks. These materials have high temperature differences and different flow-rates within the system.

Coolant
The best possible liquid to absorb heat and to keep the engine cool is water. However, water has some major disadvantages:

For this above three reasons, additives are used to enhance the properties of plain water into a suitable coolant. The added components are:

The difference between antifreeze and coolant
Antifreeze is an undiluted product to produce coolant. It consists 90-95% of Mono Ethylene Glycol (MEG) and 5-10% additives.

Coolant is a mixture of antifreeze with demineralized water in 50/50% ratio.

The frost protection varies with the percentage of antifreeze in water. A common modern antifreeze/water mixture is as follows: 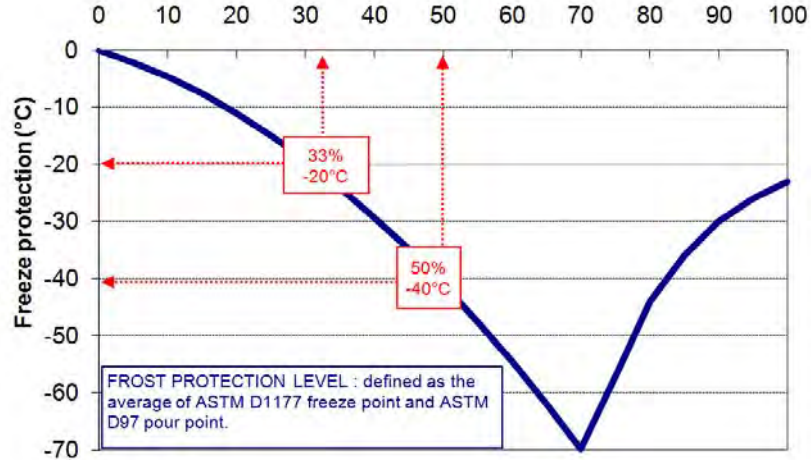 The optimum mixture ratio is a compromise between frost protection and heat transfer capabilities.

According to the chart above, the best possible frost protection will be achieved with a mixture of 70% antifreeze and just 30% water. But because of the little amount of water, this mixture has severely less heat transfer capabilities and that could cause overheating of the engine. Therefore, most of the standard ‘ready-to-use’ coolants consist of 50% antifreeze and 50% water. In most cases this provides sufficient frost protection for the majority countries, while still providing excellent heat transfer properties.

Do you need more advice about the exact applications of antifreeze and coolants? Please consult the North Sea Lubricants Oil Advisor on the website or contact our Customer Service Center at csc@northsealubricants.com